De resultaten van de internationale Aqua Scape wedstrijd van AGA 2017 zijn onlangs bekend gemaakt./The results of the international Aqua Scape contest of AGA 2017 were recently announced. Joe Harvey was number 1 in the catagory Dutch Style. He posted on 13th november 2017 on Facebook: “My 120 gal aquarium was fortunate enough to place 1st in this year’s AGA competition in the Dutch category. There were some really good submissions and Im honored to have placed so high.

For my non-aquarist friends, here is a link to check it out. When you’re done browsing the Dutch entries, be sure to go the the ‘categories’ section to see more AMAZING aquascapes from all over the world!”.

Scott Miller, met wie ik een aantal keren contact heb gehad en die mij wat verbeter adviezen had gevraagd, werd derde en tot mijn vrolijkheid reageerde Joe:
Scott Miller, with whom I had contact a number of times and who had asked me some improvement advice, became third. I think it was funny how Joe reacted:
“Really nice tank Scott Miller. Better than mine in some ways. I think the top 3 could’ve gone either way. It’s nice seeing stronger US representation in the Dutch category. Hopefully it bodes well for the future. Now if only Bart Laurens and his cronies would start playing again…we could all jockey for 3rd and 4th place! J Congrats again ! 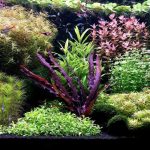 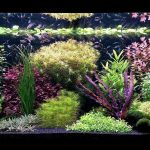 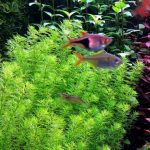 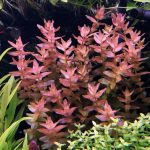 Joe asked me on Facebook: “Could you give me any advice in how to improve it, like you showed on those tanks in Denver?” So I feel free to add some comments. When you look at the groups of plants you will see that the biggest group is number 5 Diplis diandra. I would say: Never divide your tank into two parts by placing such a group in the middle of your tank. I don’t know if this is a special variety of Diplis diandra, but in my opinion this plant could be more dark green and have more red coloured tops.

Now look at the red lines that I drew into the total design and you’ll see that basicly the concept is a little bit symetric. This symetry could be broken by using some plants with different shapes of leaves.
It might help to replace nr 10, Hygrophila siamesis by a broad leaf Hygrophila corymbosa.
The shape of the leaves of Group 5 (Didiplis diandra) and 7 (Hydrothrix gardneri) is a little too similar. It might be an improvement to change Group 7 (Hydrothrix gardneri) and 12 (Oldenlandia salzmannii). That would also give a little more difference between Group 11 (Bacopa colorata) and 12 (Oldenlandia salzmannii).
The green lines refer to plants that are very wel placed. I would prefer to replace Group 3 (Isoetes lacustris) in the crosspoint of group 1,3 and 6 (blue cross). and not so specific in front of Ludwigia sp. Red.

Of course this is an opinion, you don’t have to agree.